Unfortunately, it comes with the territory when certain boxers never could and cannot capture the public’s imagination with their technical approach to fighting. Nevertheless, some of them still do go on to achieve their dream of becoming a world champion in boxing, albeit, without getting the type of glory that other boxers who are willing to go toe to toe do.

One such boxer of a more recent era is Ronald “Winky” Wright.

The southpaw former light-middleweight compiled an amateur boxing record of 65-7 and turned professional in 1990. After twenty five straight victories he saw his first defeat at the hands of Julio Cesar Vasquez for the WBA light-middleweight crown. Ten fights later he managed to win his first world title, the WBO light-middleweight trinket by a split decision over Bronco McKart. He defended the title and willingly travelled overseas to such places as Great Britain until he lost it to Harry Simon in South Africa in 1998.

Another two fights saw him face Fernando Vargas for the IBF light-middleweight title and he controversially lost a majority decision that many thought he was unlucky to be on the receiving end of. Wright eventually won the IBF title by beating Robert Frazier in 2001 by a unanimous decision. He went on to conclusively beat Shane Mosley twice as well as Puerto Rican great, Felix Trinidad in which he inflicted only his second defeat.
Ronald would unify the light-middleweight division in his first fight with “Sugar” Shane as the WBA, WBC and The Ring belts were on the line. Wright drew with Jermain Taylor for the WBC, WBO and The Ring magazine title in June, 2006 by a close split decision. Unfortunately he would see only one more win over Ike Quartey before losing three fights on the bounce against Bernard Hopkins, Paul Williams and Peter Quillin. Those last three were fought fleetingly, with much time having passed between each one. Wright spent three years away from boxing until he returned for his career finale against Quillin. He retired from the sport shortly after.

On the face of all that, perhaps you think there is not much to be impressed about. But as always, numbers and belts do not tell the full story. And neither does one’s boxing style.

The Washington warrior possessed a good jab, high punch resistance, a tight guard, could fight at close quarters and liked to box in the centre of the ring. And, of course, he was a southpaw which is a nightmare for many combatants. But Ronald was also very workman-like in his efforts and he did not see the need to be more “urgent.” Unfortunately for him, this cost him more recognition than he got.

When examining the times he came up short it is apparent that things aren’t clear cut. The decision in his fight with Harry Simon was originally declared a draw. But the South African Boxing Commission claimed to Wright in his dressing room that there was an error in the scoring and that Simon, should have in fact, been announced as the winner. His title was taken from him and given to the Namibian.

“Winky” had never had a a twelve round contest prior to fighting Argentina’s Julio Cesar Vasquez and so the fight could be considered a learning curve for him.

His 1999 battle with the then young and prime Fernando Vargas was perhaps a bit closer than what fans say it was. However, it is also quite clear that Ronald landed the more cleaner punches. So, we should understand why this one is considered controversial. It is the same kind of situation with the Jermain Taylor fight, in which a rematch never resulted due to financial disputes. 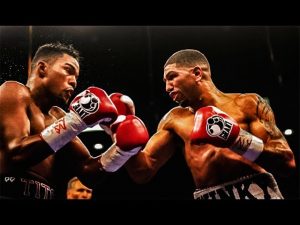 Finally, it has been stated that some big names avoided Ronald Wright. This included the likes of Oscar De La Hoya. But to be fair, I do not believe that it was all because Wright would have been a huge risk to share the ring with. Due to his unpopular way of fighting, it may have been difficult to market such a fight on Pay Per View.

Boxing is a business, afterall.

It is something that “Winky” always knew and said that he hated.

Fortunately, time is being kind to Ronald. He is gaining more recognition as the years pass us by. And it is hard to object to that.