This Saturday night Britain’s Kell Brook will return to the welterweight limit to fight three weight world champion Terence Crawford at the MGM Grand Conference Center in Nevada. The contest will be for the WBO welterweight crown.

This will be Crawford’s first fight in 2020, with his lack of activity no doubt due partly to the Covid-19 pandemic. His last contest was a title defense against Egidijus Kavaliauskas in which he won in the 9th round in 2019. Brook last fought in February this year at light-middleweight against Mark DeLuca. He came through by a TKO in the 7th round.

Despite claims that Brook has outgrown the welterweight limit, the Sheffield man has insisted that he will feel fine at the weight. 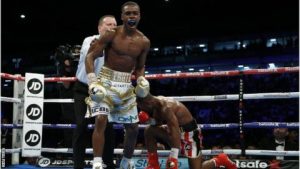 There are major concerns about Brook going back down to welterweight after his loss to Errol Spence Jr.

Kell continued, “And there’s no 10-pound rehydration clause, like before with the IBF. So, basically, I weigh in and then I become a beast. I’m not saying that I’m gonna go up 30 pounds or whatever. But it’s just gonna be something in my mind I don’t need to worry about.”

What Kell has said remains to be seen. But nobody can fault his confidence.
It is hard to believe that his three comeback fights since his KO defeat to Errol Spence Jr in 2017 is enough preparation to try and beat somebody of Terence’ pedigree. The Nebraskan has a tremendous ring IQ, speed and reflexes. He knows how to adapt which is a sign of a great fighter.

On the other hand, Brook tends to stand square on in front of his opponents and is a natural counter puncher. He can be accurate at times, although he isn’t the most precise puncher I have seen. He is not exactly a concussive hitter, either. ‘Special K’ has often needed to throw a volume of whacks to get a knockout. To his credit, he has a good chin. Gennady Golovkin failed to floor him in their 2016 fight and I believe there were obvious weight issues which contributed toward him eventually wilting against Errol Spence Jr.

Crawford has said very little during the build up to this fight but he is often the type of guy that lets his fists do the talking.

Out of the two fighters, it is Brook that is the one that needs something to prove after his hit and miss run at world championship level. Anything can happen in boxing. But no matter how I think about the fight, I struggle to see a win for the Englishman on Saturday night. 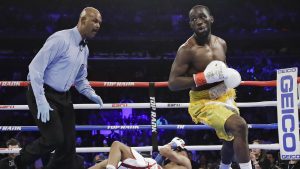 Terence Crawford is likely on another level to Kell Brook, especially at this point.

I expect Crawford be on top form, using all sorts of different angles to catch Brook at will. He will not be able to get rid of his challenger quickly or easily. Terence will face some resistance, but it won’t be anything that he will not be able to handle. And despite Brook’s claims that he will be fine at 147lb, I have my doubts and think that it will show to be a mistake the further the fight goes on.

It is possible that Brook will see the final bell. If that is so, then he will lose by a pretty wide margin and unanimously. But I also would not rule out a knockout loss.

And then I expect talks about an Amir Khan fight to heat up again shortly afterwards. Or ‘Special K’ will retire after having limited options.

As for Crawford after this weekend takes place, the hype for an eventual showdown with Errol Spence Jr will probably continue. Although it is anybody’s guess when that fight will actually happen. The pandemic will certainly not help things.

All we can do is wait and see what the future has in store. Let’s hope it turns out better than it looks at this point.